New to Coastal Carolina University, the Chanticleer Intelligence Brief (CIB) is one of the fastest growing student-led organizations on campus. Pursuing the advancement of intelligence analysis, students of the CIB aspire to apply the knowledge they acquired in the classroom. In addition, students get the opportunity to specialize in a region or topic of their choice. Originating as a club, the CIB has now expanded to a class. The class, “Applied Intelligence Analysis,” offers students 1 credit per semester and can be taken every semester until graduation. Furthermore, class participants have the chance to have their briefs published by the European Intelligence Academy in the semi-annual publication, The Intelligence Review.

The CIB, commanded by students, was developed by one ambitious student. Mr. Benjamin Malone serves as the Founder and former Executive Director of the club. When asked how the idea came about, Mr. Malone stated, “I am a kinesthetic learner, which essentially means that I learn best by being involved and practicing things to learn them.” Realizing that everything seemed to come easier with practice, Mr. Malone took note of the lack of practical applications offered in the Intelligence program. “The classes within the program require students to follow a variety of news sources every day. I would find myself going through 20-30 sources every morning trying to make sure I didn’t miss anything. That’s when I came up with the idea of having a publication or website that brought all different types of news to one place, as well as analysis to explain what it meant.” Malone took the idea to the professors of the Intelligence department. The professors at the time had already overloaded schedules, but gave their support and suggested to Malone to pursue the idea himself. Malone pleasingly commented, “Instead of responding negatively, I took it 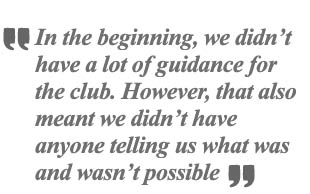 as a blank check to do whatever I wanted. So I just ran with it.” At previous educational institutions, Malone would get together with friends to discuss the news. “It was very informal, but it was fun. I realized we had a lot of students that would be interested, but didn’t have anything offered at Coastal.”

All that was left for the CIB was implementation. Building an organization from the ground up created numerous obstacles for Malone. He specifically listed three major obstacles: creativity, recognition, and support. When addressing creativity, Malone exclaimed, “We were doing something that had never been done before. Without an example to follow, we had to create our own goals and at the time the sky was the limit.” After devising a strategy, Malone now faced the obstacle of recognition. “It was difficult to get others to catch onto the vision. When doing something so different, it was hard to explain exactly what it was and what would become of it.” The last challenge, support, was a twofold process for Malone. “In the beginning, we didn’t have a lot of guidance for the club. However, that also meant we didn’t have anyone telling us what was and wasn’t possible.” The freedom led to the beginnings of the CIB: a small group of students which selected a region of interest, and briefed the group on an important finding and their analysis. Both oral and written briefs were required of the students, as well as weekly attendance.

Unconcerned with size, Malone aspired to create a group of students that would stand out from the pack. “My original vision was for CIB to be designed for exceptional, dedicated intelligence students that wanted to separate themselves […], to show at an undergraduate level, that they are capable of doing more than just graduating with a degree,” explained Malone. In order to attain the prestige intended by Malone, careful recruiting tactics were used. “In the beginning, we unknowingly recruited very similar to an intelligence agency. We went to professors and explained what we wanted to do and the type of student we were looking for. And they were the ones that referred us to the candidates.” Malone continued to describe the process with encounters of sitting in on different classes and observing the potential member. After the class, Malone would approach the student and recruit one-on-one. Malone also specified that his recruitment was not limited to

Intelligence majors. History, Political Science, Marine Science, and Economics were a few departments that offered benefits to the students. Malone summarized, “We would recruit just about anyone as long as they were dedicated and interested in analyzing current events related to national security.”

Mr. Malone’s initiative has grown to one of the most coveted student organizations at Coastal Carolina, and continues to grow. “If I would come back in a few years, there are two main things I would like to see from the CIB. The first is for students to have a better understanding of cultures and bring their regional familiarity to a whole new level in hopes of preparing students to perform better at their jobs in the Intelligence Community.” In addition to the overall growth of the Intelligence program, Malone revealed the more tangible goals for the CIB . “The second would be, that the Intel program has its own Intelligence Analysis Lab. There are labs all over campus for different majors, but none for Intel majors. The perfect example of this would be a room located on campus that has TVs and computers with with access to foreign news outlets.” With the current accomplishments of the CIB, an analysis lab wouldn’t be too far-fetched. If the CIB continues to carry on the dedication and innovation already performed, the future for the group will be very promising.