Nearly 80 people gathered at the Myrtle Beach Education Center on the morning of Thursday, December 6, for the fifth Chanticleer Intelligence Brief Symposium. The event featured timely updates about some of the world’s most critical hot spots by a panel of CIB Analysts. It was held in conjunction with the Osher Lifelong Learning Institute at Coastal Carolina University, and supported by the Edwards College of Humanities and Fine Arts at CCU.

The audience was exposed to analytical briefs about several timely topics. The CIB’s Counter-narcotics Analyst, Maddy Scholar (pictured, right), spoke about the current state of the Sinaloa Cartel following the arrest of its leader, Joaquín ‘El Chapo’ Guzmán. Gabriel Batten, the CIB’s India and Pakistan Analyst, described the volatile state of relations between India and Pakistan, two nuclear-armed regional 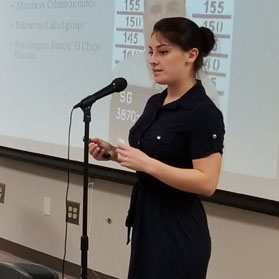 powers. Our Israel Analyst, Jared Ross, discussed the possibility that the government of Prime Minister Benjamin Netanyahu might fall from power in the Jewish state. Next came Clara Comskey, our Sahel Analyst, who explained recent developments relating to militant Islamism in one of Africa’s most volatile regions. The two-hour event concluded with the CIB’s Russia and China specialist, Connor Lewis, who discussed the current state of relations between the two once-communist countries.

During the event, the CIB raised funds for its activities by offering community subscriptions to The Intelligence Review, its peer-reviewed publication that is published twice a year in cooperation with the European Intelligence Academy. The Symposium was moderated by CIB Faculty Advisor Dr. Joseph Fitsanakis. The CIB wishes to express its gratitude to CCU Director of Community Outreach Dr. Carol Osborne, OLLI Senior Director of Operations Kelli Barker, OLLI Administrative Specialist Ellen Jampole, and OLLI Board of Advisors member Samih Baalbaki for their help in coordinating this event. The sixth CIB Symposium will be held in April of next year.