Members of the Chanticleer Intelligence Brief (CIB) met for the last time this semester on December 7, to recognize the hard work of Officers, Analysts and Members, and to renew their pledge to make the organization even stronger in the coming year. This was the second semi-annual CIB Banquet, in the tradition of the group’s inaugural Banquet, which was held last May. Just like last year, the event featured free food provided to all CIB members, which was enjoyed in a relaxed atmosphere. Welcome additions included a DJ (CIB Recruitment Officer Connor Kilgore), and a cute puppy called Heidi, which proved to be a major attraction.

At the opening of the awards ceremony, CIB faculty mentor Dr. Joseph Fitsanakis, recognized the hard work of departing CIB officer Ryan Haag, who is graduating at the end of this semester. Ryan has served the CIB from a variety of positions, including Head of the Asia and Africa Desk and Quality Assurance Officer. He was presented with departing gifts on behalf of the CIB and the Coastal Carolina University’s National Security Club, where he served as President. Dr. Fitsanakis also recognized the contributions of CIB Chief Operations Officer Jeremy Lee, who is also serving as Head of the CIB’s Europe Membership desk. Jeremy became the second recipient of the CIB Achievement Award, which is given by the Executive Team to an individual member of the organization who has gone above and beyond the call of duty in contributing to the CIB’s efforts. 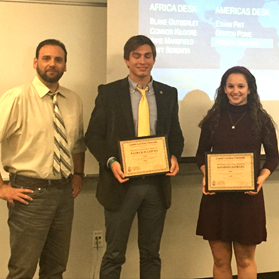 Three awards were presented to CIB Analysts during the ceremony. The Intelligence Analysis Award, presented for delivering the highest-quality oral analytical product during the semester, was won by the CIB’s Asia/Eurasia section. The section is composed of Michael Jones (head of section), Madison Nowlin, Casey Mallon and Ryan Haag. These analysts concluded the semester with the highest average evaluation score for oral briefings. The Intelligence Forecast Award, given for achieving the most successful analytical forecast record in the semester, was presented to the CIB’s Africa section. The section is composed of Connor Kilgore (head of section), Jake Mansfield, Matthew Serenita and Blake Gutberlet.

The Best Intelligence Essay Award recognizes the best written analytical product of the semester. It went to two Analysts: Madison Nowlin and Patrick Sullivan. Madison’s analytical question for the semester was: “How has Russia’s involvement in the Syrian Civil War affected its internal security?”. Patrick’s analytical question was: “Will gun-control legislation be introduced in the United States in 2017?”. Their final analytical product was deemed to be the best quality by a review committee composed of intelligence professionals.

In addition to Analysts, the CIB recognized its most promising members based on the consistency of their work this semester. The head of each membership desk nominated a member for the Rising Analyst Award, which is given for distinguished semester-long performance as a CIB member. The award winners were: Rachel Drummond (North America), Jared Ross (Central/South America), Robert Sanzotta (Europe), Julia Emory (Asia), Austin Mahon (Africa), Eric Winter (Cyber), and Skylar Simms (Russia).

The CIB wishes to thank all of its Executive Team Officers, its Analysts and its Members, for a highly successful semester, and looks forward to continuing to strengthen our organization in the future to come. We also want to congratulate our graduating members and wish them our very best as they embark on their next steps in life. Finally, a special thank you to CIB Recruitment Officer Connor Kilgore for deejaying the event. You can see more photographs from the event here.