Members of the CIB participated in the second biannual Intelligence and Homeland Security Enterprise Conference in Charleston, South Carolina. Held at the Citadel, the conference was titled “Achieving a Higher Degree of National Security“, and took place from September 16 to 18, 2015. The gathering, like the first one in 2013, featured presentations by practicing professionals from a variety of governmental agencies, private security companies, and colleges and universities.

While several CIB members attended the conference, five officers and one member of the CIB presented posters at the event. Benjamin Malone and Maryland Lewis presented a poster entitled “Practical Analysis Training at an Undergraduate Level”, while Samuel Casey and Amy Thomas‘s poster was titled: “Analyzing Customer Response to the Chanticleer Intelligence Brief Practicum”. The two posters represented two interrelated components of a larger project aiming to showcase the theoretical underpinnings of the CIB. They also contained an analysis of the results of a quantitative survey given to CIB members and analysts. A fifth CIB officer, Curran Hellgeth, presented a poster titled “Machiavelli in the Time of Tallinn: Cyberwarfare as an Application of Operational Warfare Theory”. Michael Sweeney, who is a member of CIB, displayed a poster with the title: “Chinese Intelligence Capabilities: Implications for US National Security Policy”. 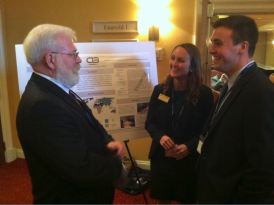 The abstract that the CIB officers successfully submitted to the conference organizers was as follows: “Our nation’s future intelligence trainees remain largely unaware of the issues and events affecting America. Studies conducted as recently as 2012 have shown that students are not cognizant of current events and do not perceive them as relevant. A group of Intelligence and National Security Studies students at Coastal Carolina University responded to this phenomenon by developing a student-run news organization called The Chanticleer Intelligence Brief (CIB), with the aim to produce deliberately brief descriptions and comprehensive analysis on world events. The CIB focuses on stories that directly affect American national security and America’s interests abroad. It has seven regions of focus; North and South America, Far East, Europe/Russia, Near East (Middle East and North Africa), Sub-Saharan Africa, and Technology. Student-analysts bring their gathered information to weekly meetings where they present and discuss it, before submitting a one-page paper for group scrutiny. Our posters will go into greater detail about the CIB process, as well as highlight the effects it has had on our student analysts. These include fostering a regional expertise, developing analytical techniques and, most importantly, improving course grades. These effects are already having a lasting impression on our students and are providing them with the tools they need to land internships, get jobs and develop fulfilling careers”.