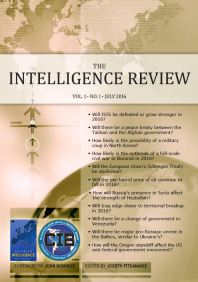 The CIB is pleased to announce the publication of the first issue of The Intelligence Review, a compendium of useful analytical forecasts by CIB analysts, which relate to some of the most pressing questions in global security today. The volume is the product of a year-long collaboration between the CIB and the European Intelligence Academy (EIA), a network of intelligence studies scholars, specialists and students, who are dedicated to promoting international collaboration in intelligence scholarship and research.

In this volume, eleven CIB analysts tackle some of the most pressing and timely questions confronting intelligence observers today. Topics range from the price of oil to political stability in Venezuela, from the territorial cohesion of Iraq to the future of the Islamic State, and many other pressing subjects that feature daily in news headlines. CIB analysts propose carefully crafted and informed forecasts that outline future developments in some of the world’s most unpredictable hot spots.